I don’t typically watch TV in the mornings. I prefer to slowly wake in the quiet, with a cup of coffee, and a few games of solitaire. I’m a lot like my dad in that way.

But this morning, I was checking in on a client, and the TV was on. And the story on CBS’s “Sunday Morning” got my attention.

The editor-in-chief of Mad Magazine, John Ficarra, was talking about the Charlie Hebdo massacre in Paris. It clearly was an event that shook him to his core, as I would imagine it does all journalists and satirists now…

Though I’m not a fan of, nor a regular reader of, Mad Magazine, I wanted to hear what he had to say.  He started with “When I was in college, a journalism professor once told me that freedom of the press is a freedom that has to be re-won every generation. I didn’t quite understand what he meant back then, but given the developments of the past few weeks, I do now.”

I was compelled to listen to every word, because I could, because I was interested in his thoughts and feelings, and because he had the right to say it.

And he said it well.

In case you missed it, here’s his segment, in its entirety.
http://www.cbsnews.com/news/mad-magazine-editor-on-the-hazards-of-satire/

I was reminded of what it really means to have “free speech,” and all that that entails. I was reminded that this country is full of screenwriters, journalists, songwriters, publicists, cartoonists, novelists, poets, stand-up comics, talk show hosts and more who, by their very nature, cannot help but spit out their thoughts, their ideas, their feelings, their stories, their opinions. And they should be allowed to do just that – because in this country, we all have that right.

Imagine being one of those staff members in Paris who, in their conference room at Charlie Hebdo, never saw it coming. Imagine being the family members and loved ones left behind who are now grieving the unthinkable, and trying to make sense of it all. Imagine the fear and torment running rampant now through that beautiful city, with the later events at the supermarket and printing factory.

Though three terrorists are dead, we all know there are more where they came from. Imagine the utter chaos, and the knot in the pit of every person’s stomach who was too close for comfort to these events, who wonder where they’ll strike next. Just imagine….

And then imagine a world where the terrorists win, and no one is brave enough to write or speak any more…

Could we be headed in that direction?

At the end of Ficarra’s segment, he signs off with this:
“By the simple act of appearing on camera denouncing the terrorists and defending the rights of cartoonists and satirists, would I be drawing a target on my back and the backs of my colleagues?
Unfortunately these days, those are not unfounded fears.
And the very fact that I had these fears? Score one for the terrorists.
On the other hand, come Monday morning, my staff and I will be back at work on the next issue of Mad.
What, us worry?”

As I type this, I think about all the things I’ve written in my lifetime – poems, songs, press releases, corporate annual reports, procedure manuals, website content, contracts, tributes to lost loved ones, and even the majority of my own non-fiction book…

And I’m reminded of how much I love the written word, and the freedom to write those words for all the world to see.

And I’m reminded of one of the greatest tools of this generation, which allows us to all communicate in ways unimagined before.

Mark Zuckerberg, and Facebook, provide a free place where people all over the world can express our thoughts, ideas, and feelings (within reason) without fear of retaliation. Thank you for allowing us to reconnect with friends and family, and to relive the memories through photos and the written word. Thank you for letting us connect with new friends, and network in ways we never could have imagined. I have used facebook to chat, with the written word, in real time with friends in Germany, Holland, Brazil, Mexico, and Finland. Where else could I do that?

Though the ads and seemingly constant algorithm changes are irritating, we try to overlook them. It’s the price we pay for having such a powerful tool with which to connect with the world.

And I’m grateful for Twitter, and the wide world of connections made possible by its inner workings. But as a writer, it’s a bit difficult to keep my thoughts to 140 characters. But we manage to get the point across even with that limitation.

And if we don’t agree with someone’s post, we have the right to simply look away, scroll right past it, or delete it. It’s not that hard…

How these terrorists felt it was their right to execute someone whose beliefs and ideas didn’t align with theirs is beyond my comprehesion. How does one live with oneself knowing that you took a life, not in self-defense, but because of twisted ideals and lack of morals?

Pure hatred drives them. And I believe there’s a special place in hell for people like that.

My youngest brother, Michael, visited Paris in 2013 and 2014, and he loves everything the city has to offer. And for years, he was the art director for a magazine. I can’t help but think of all the staff meetings he must have attended in their offices, discussing, planning, and designing their next issue. Did they ever think there would come a day when some of their colleagues, though an ocean away, would be killed for doing their jobs?

My heart aches for the people of Paris, and for writers everywhere… 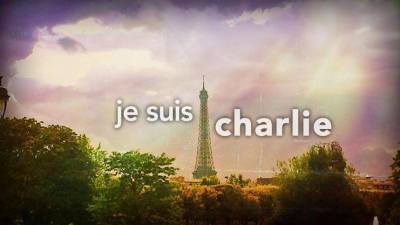