Those who know me well know that I’m fairly shy, and I’m comfortable in the background, going quietly about my life. I keep a low profile, and don’t get vocal about too many things.

But recently I was compelled to respond to a facebook post by Melanie Layden, WSMV‘s traffic reporter, about Nashville’s traffic. She wrote that they’d be airing an “exclusive sit-down interview with Mayor Megan Barry as we talk about what the future of Nashville’s transit system looks like… and what that will mean for our traffic as the city continues to grow.” 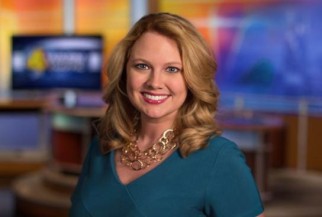 I responded with “Please ask her what’s being done to alleviate the already existing traffic congestion in Green Hills, and what the plan is to handle the influx of a minimum of 300 additional cars when the new apartments at Hillsboro and Richard Jones opens in December. If two people live in each apartment, that’s 600 more cars trying to navigate an already gridlocked Hillsboro Pike. I live on Hillsboro, a few blocks from that new building, and lately it takes ten minutes to go 1 mile to the post office – even if I cut through the back neighborhoods. I can’t imagine what it will be like with all those new people, AND all the cars full of people who will come to shop and eat at the new restaurants on that same corner. What a nightmare!!”

A week or so later, she wrote back “Yes, you are so right about Hillsboro Pike!! You’ve inspired me to make my next story on this. Do you live around the area in Green Hills? Would you be willing to talk to me on camera about how terrible the traffic is for you? (I’m also going to be talking with city leaders to see what’s going to be done to fix it.)”

When she asked if I’d talk with her on camera about it, I immediately wanted to. But I didn’t know if I’d be comfortable doing it.

I flashed back to several years ago, when I was in Austin, Texas. I was at the Midwest Arts Conference with two of my artists, EG Kight and Lisa Biales, (together known as the “Peach Pickin’ Mamas“) and they were getting ready to take the stage for their showcase. The announcer wasn’t doing a very good job, and talked so quietly that the audience could barely hear him. So Lisa grabbed me by the arm, pointed me toward the stage, and said “You need to introduce us!”

I didn’t have time to think about it, or to panic.

So I walked up to the front of the room, and without even using a mic, I projected my voice loud enough for all to hear, told the audience how glad we were to see them, gave a one-minute introduction for both Lisa and EG, then introduced them as the Peach Pickin’ Mamas. And it was SO easy!

Here are EG and Lisa performing, after the introduction. 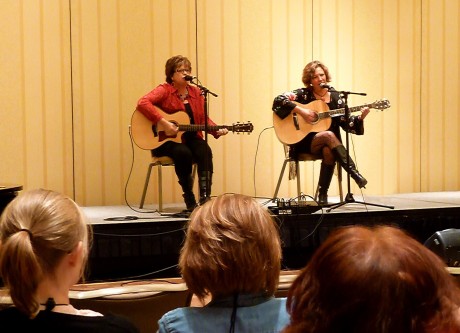 The next day, at the conference, I got up in front of a different crowd and told a little bit about the PPM’s, and invited everyone to come visit us at our booth.

And THAT was easy, too!

Lisa changed my life in that one moment, when she didn’t ask, but TOLD me to get up and speak…
It gave me confidence, and nothing has been the same since.

So when Melanie, the WSMV news reporter asked if I’d talk on camera with her, I remembered Austin. And I remembered that when you know a lot about a subject, it’s easy to talk about it. I gave it serious consideration. Over time, Melanie was encouraging without being pushy. So I finally agreed to do it. And it felt good.

Here are photos I took in one afternoon in Green Hills a few months ago, in the middle of the day, NOT during rush hour. Here’s a look at traffic in front of me, and traffic behind me. 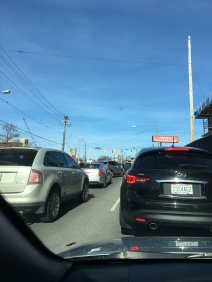 And here’s what the typical congestion is like on Hillsboro Pike, within just a few minutes, while waiting at a one red light.

With that in mind, here are two links to the stories that aired on WSMV. 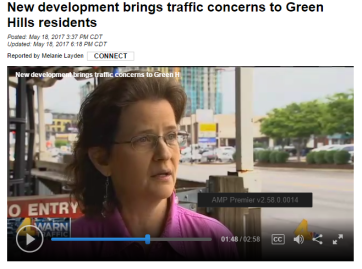 It was interesting to hear Melanie say that “Metro Public Works tells Channel 4 that it’s often a misconception that mixed use developments bring in more traffic. They say that Hillsboro Road has the capability to handle the extra traffic that will be thrown at it, and then some.”

What world do the folks at Metro Public Works live in?!?

And I find it interesting that in the second story, the CEO of the development group states “I don’t think people will get in a car at our building and drive to Trader Joe’s. They’ll walk there.” And he states that Southern Land’s “sidewalks will be big and wide.”

That doesn’t help ease traffic congestion when all 300 (possibly 600) residents have to get in their cars to go to work every morning, and drive back home every evening.